The expression “Country House” is already associated not so much with a wooden hut with conveniences in the yard, but with a full-fledged high-tech house equipped with at least its own water supply, heating and a powerful power line. In such areas, Smart Home technologies have been used for a long time, allowing to solve urgent tasks remotely, whether it is turning on the heating when the owner arrives, locking the windows after he leaves and opening / closing the garage door or entrance door.

In the latter case, the tenant will need to use either some kind of built-in system or an accessible street intercom, which has the same functions as access devices, but is intended for use by one subscriber. In addition to the audio system, such calling panels are equipped with a video sensor, thereby allowing full video control of the territory in front of the lens and full-fledged two-way audio communication with the visitor. The CCTVLab laboratory has tested the basic features specific to video intercoms, namely how they capture and transmit sound.

WHAT AND HOW WAS MEASURED

The maximum volume of the speaker of the calling panel and the minimum distinguishable sound from the microphone (its sensitivity), which can be set in the settings, were measured. These measurements were carried out using a special sound level meter in a “quiet” room, the background noise in which did not exceed 30 dB.

Screenshots of the image were taken in front of the door station lens under difficult conditions.

DS06M has the largest viewing angle taking into account the rotation of the structure – 182 degrees. The leader in microphone sensitivity (30 dB) and is among the leaders in maximum speaker volume (68 dB). 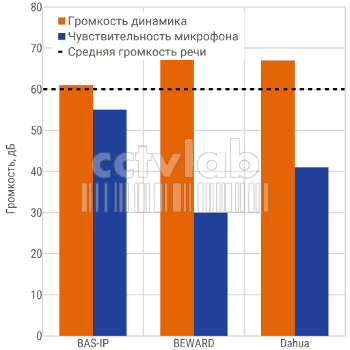 It can be noted that all on-door speakerphones have a significant margin of microphone sensitivity, allowing you to clearly hear human speech. The average talk volume is approximately 60 dB, while the average microphone sensitivity in the test is 41 dB. In addition, the dynamics of all the calling panels allow you to transmit a sound signal sufficient for the visitor in volume (average value of 67 dB).

Figure 2: Crop of screenshots from the outdoor panels when shooting a visitor in front of the lens at backlight and simulating the contamination of the lens

Simulation of the contamination of the lens, together with the backlight from a powerful spotlight, leads to the fact that the light spot on the calling panels becomes larger, however, it is still possible to distinguish the visitor. In any case, after installing the call panel, its lens should be kept clean, otherwise, even under optimal conditions, the real resolution of the panel will be less than the original. 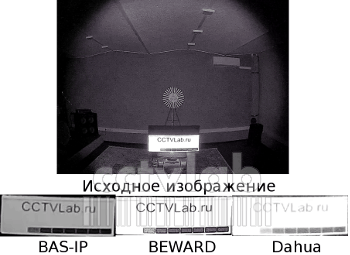 Figure 3 Crop of screenshots from the call panels when shooting an object located close to the lens, with the built-in backlight 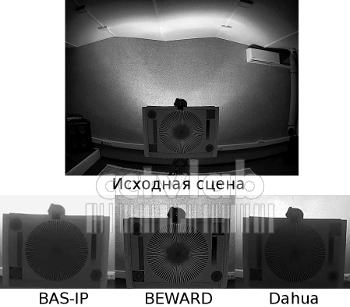 This experiment shows how much objects will be illuminated if they occupy a small part of the image area, against a dark background, when IR illumination is working. This test can be considered an imitation of conditions when there are no objects reflecting IR radiation in the field of view of the intercom, and at night one person begins to approach the intercom. 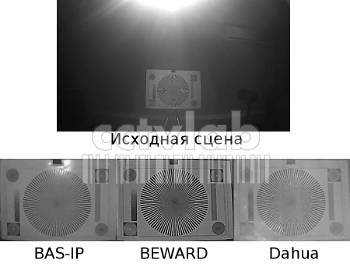 It is typical that when the background or side illumination is turned on, the test table for call panels becomes less distinguishable, the installer should pay attention to this mode of operation and try not to use the panels where there is noise illumination in poor main lighting.

As a result of testing, we can safely say that all video calling panels perfectly solve their basic tasks. With work in difficult conditions, a change in the quality of shooting is observed. During the installation and operation of outdoor panels, it is worth remembering about such phenomena and limiting their impact on the operation of the device.

The full version of the article is available on the CCTVlab independent laboratory  website .

About the Author: Anton